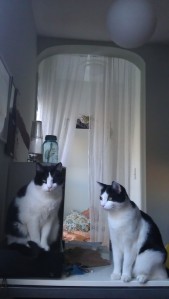 It’s no coincidence that cats and mice take the scalpel most when people (for instance, Panksepp 1998, 2001, 2007) research play and play deprivation, giving new meaning to the phrase “playing cat-and-mouse” (whomp-whomp). Cats, like humans, maintain some level of playfulness into adulthood. And perhaps the reason they dominate the internet is this: they are expert, ridiculous players. They so dominate YouTube that when GoogleX developed a simulated brain, the brain taught itself to recognize cats. FOR REAL.

However, despite feline internet dominance, it appears that we are facing a major crisis.

It’s true. The problem is this: Cat owners have a play deficit. Cat owners don’t know how to play with their cats.

Jackson Galaxy, host of the Animal Planet show My Cat from Hell, says that 99% of his consultations with cat owners drill down to discomfort with how to engage in daily, playful connection with their cats. Jackson coaches cat owners that the key to successfully playing with cats is to get inside the cat’s head and figure out “what makes it tick.” Basically, you need to pay attention to the person/thing/animal with whom you are trying to play. For instance, when you understand that “a cat wants to kill things,” you create playful opportunities that simulate a cat chasing and capturing, for instance, a crazy tropical bird made of surveyor’s tape, a coat hanger, and some random feathers. Once the cat captures your Franken-bird, you give the cat a little protein-rich treat. SIMULATION COMPLETE. CAT AND PERSON HAPPY.

In a sense, Galaxy is a kind of cat playworker. He says that playing with your cat can lead to close, positive, and emotionally-fulfilling relationships. The cat gets some personal (um, “animal”?) benefits, too. Through play, “victim cats” may gain a sense of territoriality. “Bully cats” learn to back down and be a bit more flexible. That’s a benefit of playing with other humans, too, but that’s another story.

Here’s what I think is kind of funny: there is a world of people (um, like me) who are obsessed with both virtual cats as well as our living, breathing, pooping, playing cats. This has led to the existence of a lot of online cat behavior resources. However, you rarely find a blog or how-to column that says “cats have forgotten to play.” That would be absurd. Why would you blame the cat for “forgetting how to play?” Cats just play.

The same cannot be said for the hundreds of blogs that tout “play deficit disorder” among children. Suddenly, it’s not OUR (the adults’) fault. It’s the kids. They, not we, have forgotten how to play.

For an extra does of absurdity, take a glance at the following statements made about children and play,  with “children” replaced by “cats”:

“Holy cowboys and indians, [cats] have forgotten how to play.” (Australia)

“Play is just a natural thing that animals do and humans do, but somehow we’ve driven it out of [cats].” (United States)

“Only one in five [cats] today live within walking distance of a park or playground, according to the Center for Disease Control and Prevention, and many lack access to spaces for play altogether.” (United States)

The idea that a cat might lack access to spaces for play is absurd. My cat is batting at my computer cord as I write this. Just like children, where cats are is where they play (to paraphrase the Opies). However, a fulcrum of the “play deficit” debate is, of course, the “where,” or space: in particular, the playground, which is a relatively new and, I would add, regulative  addition to human playfulness. Organizations like Kaboom, who rue the “play deficit,” act on the idea that there aren’t enough playgrounds in our cities. To further emphasize the point, Kaboom’s “Playful City” award goes to cities and towns that have committed to providing more playgrounds. According to Darrell Hammond of Kaboom (in an interview):

“Well, a playful city is somebody that is looking at both the short-term and long-term strategy in approach to understanding what the current state of play is, meaning where are all types of play opportunities from courts to fields to parks and to playgrounds to walking paths, and then understanding where the gaps in quality are.”

It’s good to look at the built environment as an inhibitor or advancer of playfulness. But we cannot focus only on playgrounds. Without a dispersed view of playfulness, playgrounds are essentially playpens, designed by adults who are consciously or subconsciously fearful of the spontaneous play and political efficacy of young people. As Lady Allen of Hurtwood wrote in 1968, “Modern civilization interferes with a heavy hand in the spontaneous play of children.” Without an individual focus, the debate about the “play deficit” and playground proliferation is missing its core: that is, the shifts in habits of playfulness that adults would have to make in order to truly make a city more playful. We, as adults, need to start with ourselves, and THEN move on to the sidewalks we travel. Once we start looking at the built environment with not the “eyes of a child” but, rather, a playful eye, THAT is when real shifts can begin.

But, like the internet, let’s get back to cats.

About six months into “ownership” of both a cat and a small kitten, I realized something terrible. That whole thing about cats and play? As I pored over Lady Allen of Hurtwood’s Planning for Play and Dr. Kitten nibbled at its cover, I realized this, much to my dismay: I wasn’t good at playing with my cats. I, despite my immersion in play theory, was a cat owner that did not know how to play with my cat. The cobbler’s son had no shoes.

So I stopped reading and started playing. When I was a kid and spent time with my childhood cat Mittens (don’t judge– I named her when I was six!), play was pretty easy. But even as an adult with my own children of the corn, matchy-matchy cats, it became pretty clear that my own cat play deficit was easily remediable. I just had to focus a little bit.

Months later, everything is not perfect. However, I feel like I’m a better cat player. And as I write this, now, Dr. Kitten is snuggled in with me on my chair. He didn’t change. But I did. Now we just need to transfer that process to adults, kids, and playing.

Megan Dickerson is an artist and community builder. She believes that playful experiences can help families learn more about themselves and each other. Check out more of her work at www.takeplayseriously.org. View more posts