Winter Storm Nemo just blew through Boston, leaving about five feet of snow on yards, driveways, and, well, everywhere. The shared nuisance of digging out cars and sidewalks creates a social environment that’s somewhat unparalleled; neighbors talk to each other, smile at each other, help each other. Snow– a common nemesis– becomes a social medium.

Snow can also be, of course, a good spontaneous building material. It’s safe to say that while many labored to clear space, other playful people took the products of snow shoveler’s labor to build snow forts in whatever space they can find.

So, the two things that seem to happen in parallel are:

A. We talk to each other because we suddenly all have something (negatively viewed) in common

B. We literally build stuff together because suddenly there is available materials.

What if we could bring the two together in a non snowy space?

On Friday nights where I work, the parents who come are deservedly tired. It’s the end of a school and work week. Some adults still wear work uniforms. When I walk down the hallways, the exchanges I see between adults parallel the exchanges I see on my street after a blizzard.

“Whew. I just needed to sit down.” [finds coveted space on bench, sighs]

“Me, too. This was a crazy week.”  [settles back into bench]

These adults already have their “snow”– but instead of a blizzard, it’s the shared experience of being grown-ups who work hard, love their kids through the good and bad, and somehow, at the end of a long week, manage to end up at a place where those kids like to be. Simultaneously, their kids are doing the play space version of what they do after a snowstorm– they’re making stuff and playing around.

Could we design some spatial intervention that builds on this concept of “Me, too” while also engaging kids in the process? What is the institutional version of a movable, morphable, snow-like building material that can connect people in struggle?

Since the tired adults in question are already sitting on the few available benches in the space, this immediately reminded me of a bench that my friends Ben Durrell and Mika Gilmore recently designed for the deCordova Sculpture Park and the ArchitectureBoston Expo:

I can imagine the bench– called the c612– being used as a slide, a recliner, or a place to hide in plain sight. You can sit back to back, on top, or even under it.

It reminded me of other recent “seating interventions” I’ve seen, from Adriaan Geuze/West  8’s hammocks on Governor’s Island:

To Bevan Weissman’s Web, a triple hammock sculpture made of climbing rope and wood: 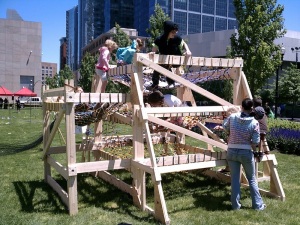 To the bases of Shouwburgplein’s amazing, movable lampposts (also Adriaan Geuze), which act as benches, beds, and more. My colleague, who grew up in Rotterdam, says that they’re a relaxing place to people watch.

What could (or does– please share examples, if you have them!) a morphable, social seating system in a museum look like? Would it be a corner with mattresses, couches and sheets– basically a public living room, with permission to much things up?  Snow is interesting because it creates a sense of shared fun or shared misery– something to work with, or something to deal with. What would the seating equivalent of snow look like in a cozy corner of a public space?