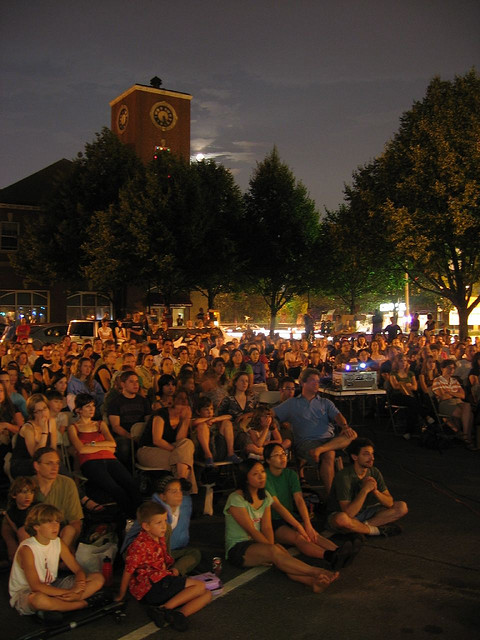 Willy Wonka in Smellovision was a 2008- 2009 collaboration with artist Bridget Matros. We wanted to create an outdoor movie theatre experience that was truly multi sensory and required some kind of physical participation on the part of the audience beyond seeing/feeling.

The result, a scent-enhanced screening of the 1971 film Willy Wonka and the Chocolate Factory starring Gene Wilder, was part performance art and part family picnic. Here are the main ingredients:

– 3 sterno-heated bowls of cabbage and water

– Airzookas, plastic devices that launch a burst of air about 30 feet

In planning, we focused in on the insider-outside aspects of the original Roald Dahl story. Charlie is a dreamer and an outsider. He’s a kid surrounded by lots of adults. Instead of being allowed to act like a child, he is forced to play an adult role because the majority of grown-ups around him are only capable of emotional– but not financial– support. He’s a kid suffering from standard play deprivation. Then this opportunity arrives– to acquire the golden ticket that offers entry to Willy Wonka’s factory. He, like other people around the world, becomes hopeful but grabby. Everyone is trying to acquire, acquire, acquire. It becomes obsessive, even mores after the five prize winners and their parents enter the factory and compete for the final prize.

Even though the screening took place in a parking lot with somewhat ample space, we limited the number of people allowed in within the “scent perimeter”– a roped off area in the center– to 175 people. As audience members crossed the threshold, this was the sequence of events:

2. Bridget Matros, in a character that merged Willy Wonka with a sort of circus-like ringmaster, made each audience member raise his or her hand and promise “to do as you are told.”

3. A normal, small Oompa Loompa handed each audience member a small brown paper lunch bag that read, in large letters, “Do not open this bag until you are told.”

The bags held items that the audience would use at timed intervals: chocolate to eat when the fudge river gushes onscreen, bubble gum to chew when we see Violet Beauregarde, party poppers to pull when the elevator pushes through the glass ceiling. The bags also had quotes from the 1971 film and references to their sources; many of the memorable lines in the film were taken directly from poetry, largely British and Victorian, and were not in the original Dahl book. For instance, Wonka says “Oh, you should never, never doubt what nobody is sure about,” a direct quote from Hillaire Belloc’s The Microbe.

People who did not get into the scent perimeter were sad and disappointed; they stood just outside the neon orange surveyor tape marking the perimeter, and begged to get in. There actually wasn’t much of a difference between being inside the perimeter and outside the perimeter. Everyone could see the movie and smell the scents we would waft using fans and other devices. Some people outside the perimeter even got goodie bags. The tension came from being in or out; included or excluded. And many adults, in their disappointment, began to act a bit more like children.

I won’t talk much about the secrets of the scents we actually projected during the movie. That’s part of the mystery of the show, and should we ever do it again, I would want you to be surprised. Because beyond the insider-outsider perspective, that’s the core of the show: the wonder of what-if, what-now, and what-can-happen. In the end,  HOW we push scent into the space doesn’t matter as much as the fact that four hundred people are gathered, under the stars in a lot usually reserved for cars, and breathing in deeply to pull a lone scent of ginger ale into their nostrils.

Megan Dickerson is an artist and community builder. She believes that playful experiences can help families learn more about themselves and each other. Check out more of her work at www.takeplayseriously.org. View more posts